Rasputin is the main antagonist in Anastasia. Christopher Lloyd and Jim Cummings did both his speaking and singing voices, being of black magic forces of darkness.

Rasputin is an evil megalomaniac sorcerer, and the self-proclaimed "most mystical man in all Russia". In 1916, he attempted to kill the Romanov family, including then eight-year-old Anastasia. After storming the palace and sending in troops to execute the rest of the family, Rasputin saw the empress dowager Marie and the young dutchess escaping from the chaos. The two were seen crossing the frozen rive, trying to stay hidden from the evil man who plotted his attack from the bridge above. He screamed as he jumped down harshly onto the dangerously thin ice and just barely grasped Anastasia by her snow-drenched foot; which caused the empress to lose her hold on her granddaughter and scream in fear. Rasputin violently began thrashing the girl in the icy waters, warning her that she would never be able to escape his clutches. She pleaded for him to let her go, but his grip became so increasingly tighter along her ankle that her attempts to shake him off seemed futile. As he went in for the kill, the ice beneath them broke entirely and before he could pull her down with him, Anastasia kicked her leg free, her soaking wet slipper almost being peeled off by the evil mans long fingers- which began to desperately claw into the ice as his robe filled with water, suckiy him down. The empress yanks the duchess away from the hole in the ice and they watched him violently drown.

Ten years later, it is revealed that he survived in Limbo as a living corpse, unable to die until Anastasia is killed. Bartok, his bat servant, explained that Anastasia was still alive in St. Petersburg. Bartok also provided Rasputin with his magical reliquary, thus restoring his old powers. Rasputin summons a legion of demons to kill Anya and complete his revenge, resulting in two failed attempts. This includes a narrow escape from a separated train in Poland that Anya, Vladmir, and Dimitri jump off to avoid falling to their deaths, and a nightmare aboard a ship en route to Paris from Stralsund, Germany, where Anya nearly sleepwalks overboard until Dimitri rescues her, alerted by Pooka. These failures make Rasputin realize he must kill her in person.

Rasputin takes advantage of Pooka leading Anastasia into a garden maze, and traps her there to reveal himself. He then tries to kill her on the Alexander Bridge over an icy Seine River. Dimitri returns to save her, but is injured and knocked unconscious. Anastasia manages to destroy Rasputin's reliquary by crushing it under her foot, causing him to disintegrate into dust, his soul awaiting eternal damnation with his hunger for revenge unfulfilled.

Role in Bartok the MagnificentEdit

Although he doesn't appear in Anastasia's spin-off, in the scene the Bartok explains his adventure to the people of Moscow, a man that looks a lot like him appears trying to touch the potion 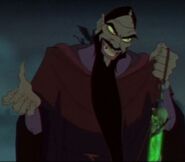 Add a photo to this gallery

Retrieved from "https://anastasia.fandom.com/wiki/Grigori_Rasputin?oldid=4936"
Community content is available under CC-BY-SA unless otherwise noted.